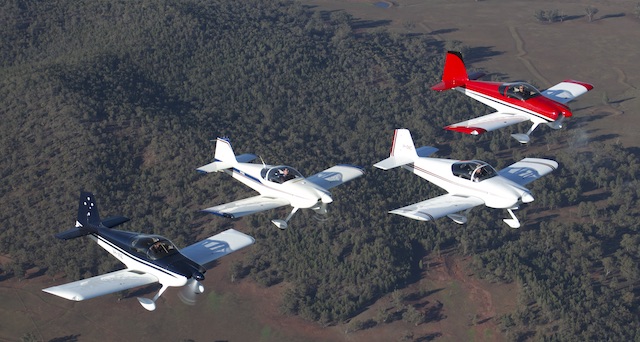 Since I learned to fly in 1999, some of my most pleasurable experiences have been received by sharing aviation with other people. Especially people who've never done it before, but who might "catch the bug."

Maybe you're one of them.

I've written this brief guide to make sure my passengers know what to expect. Have a read through it, give me feedback on anything that should be changed, or anything you think other guests might want to know about.

And thanks for coming.

How the day will unfold

Most flying days have a fairly similar schedule. In the next few sections I'll walk you through it.

We'll have talked about the meeting location and time before the day. It'll be based on our intended arrival time at our destination, and will allow enough time at Bankstown to preflight the aircraft, perform any flight planning, check the weather, and taxi for departure.

We can meet just about anywhere in the Western part of Sydney, or even some mutually agreeable part of the North Shore. If you have your own transport, we'll probably meet at the hangar. 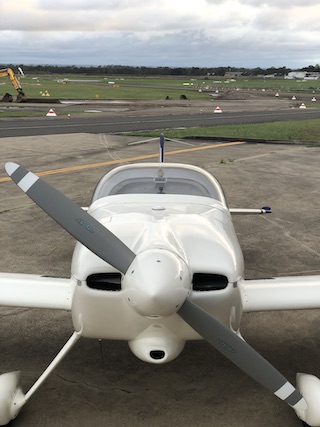 I have almost everything we need at the hangar, but there are a few things you should bring with you.

You can also bring a backpack or handbag, there's plenty of room in the back for baggage.

I'll have performed some high-level planning before arriving at the airport. Some of it can only be done with an up-to-date view of the weather, though, so I'll probably spend a bit of time in the hangar's briefing room with an iPad performing some navigation calculations, including estimates of how much fuel we'll need.

The aircraft has a detailed airworthiness inspection at the beginning of each flying day, where I check it over to make sure it's in good condition, with nothing broken, loose, leaking or deformed. I also check to make sure it has enough fuel, by "dipping the tanks" so we know how much is on board even if the gauges are malfunctioning.

Aircraft are built to be incredibly strong where they need to be, but light-weight in places where strength isn't required. I'll show you how to enter the cockpit and get yourself seated without breaking any of the fragile parts. I'll also show you how your seatbelt works, where the first aid kit is, where the emergency rescue beacon is located and how to set it off, and how to open the canopy to exit the cockpit in an emergency.

Think of this in the same way you think of airliner safety briefings ("the emergency exits are here... your seatbelt works like this"). I need to go through many of the same things they go through, so pay attention! 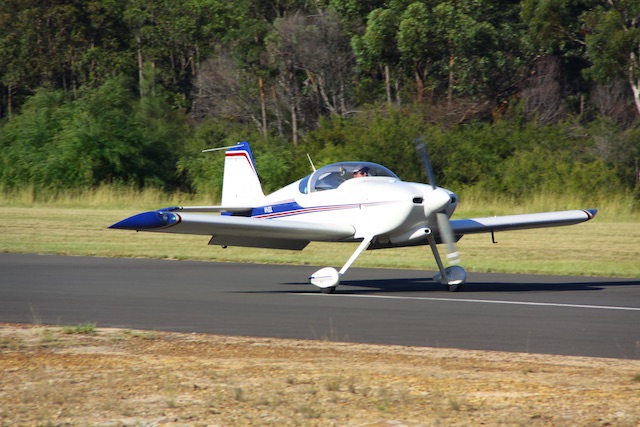 I'll be pretty busy for a few minutes after the engine starts. The navigation systems will need time to boot up, and while that's happening I'll be listening for the Automated Terminal Information Service (ATIS), which is broadcast by Air Traffic Control (ATC) on the radio to tell pilots about local weather and runway conditions.

Taxiing to the runway

When we're ready to leave the hangar, I'll call up ATC on the radio and give a call like, "Bankstown Ground, Sierra Oscar Lima is an RV-6 on taxiway Hotel with information Alpha, request taxi for an upwind departure."

Names like "Hotel," "Charlie," and "holding point Alpha-8," are like street names and locations on the airport. An instruction like that tells me where ATC wants me to go, and how to get there.

On our way we'll stop in at a place called a "run-up bay" near the runway. When we get there I'll point the aircraft into a headwind and perform some final pre-takeoff engine and system checks. I'll program our intended course into the navigation systems, set up the autopilot, and run the engine up to a moderately high (and noisy!) power setting so I can make sure it's running correctly and both ignition systems are working. 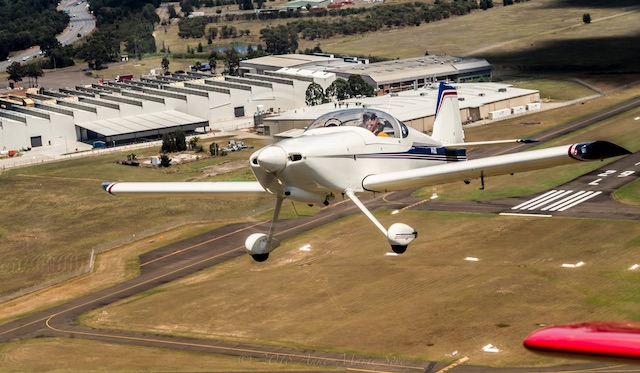 When we reach the runway, we'll have to talk to ATC again to get a takeoff clearance, which might take a few minutes if there's a queue of other aircraft taking off or landing (landing aircraft always have "right of way.")

When we receive our clearance, I'll point us down the runway, set the engine to full power, and we'll rapidly build speed and take off. It happens a bit sooner than you expect!

The first part of the flight is usually pretty busy for me, and I won't be interested in talking much. This is one of the sterile cockpit phases, where we should restrict conversation to subjects which have immediate safety implications. So I'm genuinely interested if you see a flock of birds or an instrument panel gauge which has strayed outside its marked green zone (speak up, even if you're not sure; If it's nothing to worry about there's no harm done), but I'm a lot less interested in finding out how many of the houses below us have swimming pools.

Once we've departed, we'll be in the cruise phase, and things will be a bit more relaxed. Conversation is fine, I can show you how stuff works on board the plane, answer questions, whatever.

Except in very limited cases, we're also free to vary our course, altitude, even our destination. So we can change our plans in the sky at any time. If you want me to manoeuvre the aircraft to give you a better angle for a photo of something on the ground, that's no trouble at all. 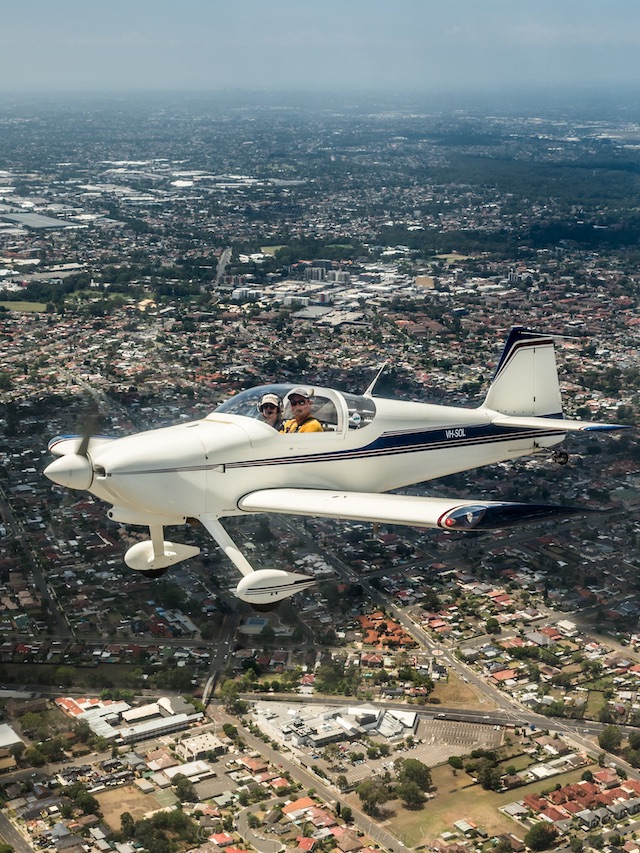 One of the most important things for us to do in the cruise is to look out for traffic. Other aircraft at the same altitude can approach from any direction, so it's important to maintain an effective look-out. If we're talking but it looks like I'm not paying attention, that'll be why. You can help too: Keep a look-out for other aircraft, and draw my attention to them when you see them.

As we get close to our destination, I'll start to get busy again. I'll have to plan a descent and approach to the runway, and airports tend to be places where other aircraft congregate so we'll have to intensify our look-out.

The usual approach to an airport is called a "circuit," where we fly a U-turn about 1km wide around the approach end of the runway. Different airports and weather conditions can make us change the plan, so I'll tell you what's going on as we get closer.

The last few minutes of the flight are another sterile cockpit phase. I'll tell you when non-essential conversation should cease, and we should keep things focused on safety from then until we've landed and vacated the runway.

Sometimes we'll join other airplanes for formation flight. There are some very stringent procedures we deploy to make it safe, and there are "bug-out" options for all formation aircraft at all times.

Some manoeuvres in formation can be very abrupt or intense, especially "rejoins" (where we come together into close formation), "breakoffs" (where we abruptly pitch out of the formation) and "combat" (follow-the-leader dogfighting)

It can be disconcerting to fly very close to other aircraft, but I"ll do my best to set you at ease. If you have questions, don't hesitate to ask; And if you're uncomfortable and want to stop, just say the word and we'll get out.

My formation group is pretty accomplished, and has performed in several invitation airshows. We're very proud of our safety culture, we take our procedures very seriously. That's why we were featured in the aviation safety regulator's Flight Safety Australia Magazine July 2019.

Like most recreational pursuits, flying in small planes comes with a certain amount of risk.

The aircraft themselves are very safe: Very few accidents are caused by mechanical failures or defects. Most accidents have some kind of relationship to the decision making of the command pilot, usually in conjunction with one or more other causes. 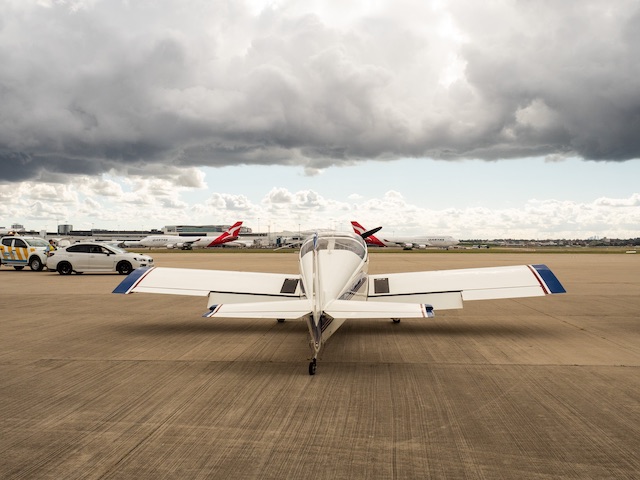 I take a very conservative approach to decision making, with wide safety margins and strong "personal minimums" buttressed by training. For example, I have had extensive instrument flying training as part of my Night VFR license rating, so I know we'll be safe if we fly into clouds, but I don't fly into them anyway because the additional risk isn't worth it. I also know I can land with a 20 knot crosswind, but won't fly if the crosswind forecast is higher than 15 knots; I know the aircraft has 5 hours of fuel capacity, but I won't fly more than 4 hours without refueling. These are all examples of decisions I can make to "opt out" of the accident stats.

That might mean that we arrive at the hangar, plan, preflight, refuel, and then put the airplane away and go to the pub because the weather conditions aren't right. These things happen, I cancel a handful of flights every year at the hangar door, and if it happens to you I hope you'll understand and try again on a better day.

Another part of my safety culture is about feedback: if you feel nervous or unsafe, never feel like you can't say something. I know that flying in small airplanes is a foreign experience for most people, and a mark of my success is the extent to which I can put my guests at ease. If we need to abort because you're unsettled, that's completely okay.

Finally, one of the ways I can assure our safety is by giving you instructions. The airplane might be a foreign environment for you, but it's a familiar one for me. Please help me to keep you safe by trusting my judgement and following my advice at all times.

I'm going flying whether you come along or not, so you're not costing me anything.

If you really feel like I should have some compensation: Consider yourself on the hook for giving me a free flight when you get your pilot license. Thank you!

I've tried to be fairly comprehensive here without making your eyes glaze over with detail.

If you have any questions I haven't answered, please feel free to ask. And if you have suggestions for this briefing sheet, I'll be delighted to hear about them.