I've been flying various types of aircraft since 1999.

My introduction was in VH-KRO, a Krosno KR03A Puchateck, at the Adelaide University Gliding Club's airfield in Lochiel, South Australia. Over the ensuing years, I trained, built up skills, and developed through the GFA hierarchy, including a three year stint as AUGC's Chief Flying Instructor.

Seeking novelty, in 2008 I commenced training for a CASA Private Pilot License (PPL) with Forsyth Aviation at Parafield in Adelaide, under the erstwhile tutelage of Bev Roediger, Sarah Allen, and Mike Foley.

I acquired VH-SOL in 2011, in syndicate with two other Adelaide pilots. I bought-out their shares when I moved to Sydney in 2013, and have been upgrading the airplane ever since.

In my day job, I'm a network engineer for an internet company. No, I can't fix your Windows computer. 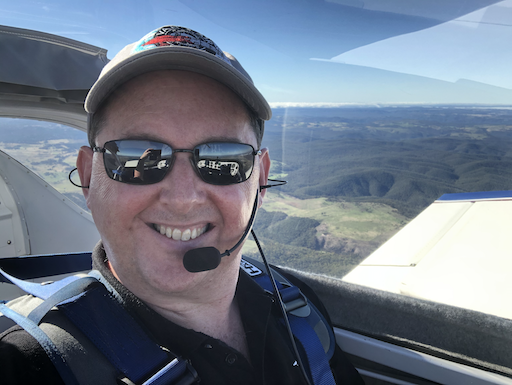